In 2016, the life of Elena from the Moscow region suddenly changed. She went to the doctor with complaints of severe pain. At medical examination, the primary care physician felt a large growth in the side saying that the tumor was as hard as a brick and sent Elena to the oncologist. The latter confirmed all diagnostic fears, and after numerous studies, the diagnosis was announced: a retroperitoneal liposarcoma.

Without hesitation, Elena applied to P.Hertsen Moscow Oncology Research Institute - a branch of the NMRRC, where she was successfully operated.

But, unfortunately, the liposarcoma’s peculiarity is such that this cunning and very evil tumor has a habit of recurring.

In 2019, the history repeated itself. And again Elena had to go along a troublesome path from examination to removal of the tumor, although the treatment took place in one of the clinics nearby Moscow.

In 2021, the relapse made itself felt again. The tumor grew rapidly and became much larger in size. According to Elena, the clinics to which she applied for treatment refused to do it, honestly admitting that their doctors’ qualifications were not sufficient enough for removing a difficult relapse.

Elena's daughter again called the first attending physician from the P.Hertsen MORI in the hope of saving mom. Since then, Dr.Ilya Kolobaev has been assigned to head the Thoracoabdominal Department of the A.Tsyb MRRC, another branch of the NMRRC. He invited Elena to MRRC in Obninsk.

Before the operation, a small, but courageous and strong woman confessed to the doctor: "I will withstand any test, I just hope to live."

The doctors' fears were justified. They had to fight a very cunning and insidious enemy, who, knowing that it could be destroyed, hid behind the vital organs and major vessels so ingeniously that it was just mpossible to extract it from there.

Doctors faced a massive adhesion process, the liposarcoma had literally sprouted into the intestines, ureters and swallowed the aorta and inferior vena cava.

A real battle for Elena's health lasted for nine and a half hours. The surgical team was headed by Academician Prof.Andrei Kaprin. Even he, who had seen numerous types and sizes of liposarcomas, admitted that surgeons had to perform an extremely difficult operation.

Surgeons – Prof. Andrey Kaprin, doctors Ilya Kolobaev, Sergey Arazumanov, Vladimir Yofik, Leonid Petrov, Dmitry Kudryavtsev with great precision removed the tumor, part of the large intestine, the right ureter, part of the aorta and inferior vena cava. They expressed special gratitude to the anesthesiology team led by Dr.Alexander Potapov, who, despite the sufficient blood loss that always occurs in such cases and despite massive surgical expansion, perfectly coped with the operation difficulties.

Our fragile, but very strong patient has already been transferred from the intensive care unit to the ward and is undergoing rehabilitation after such a serious and extensive surgical intervention. We wish her a speedy recovery and discharge home to her beloved husband, children and grandchildren! 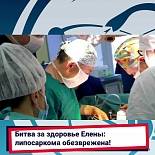 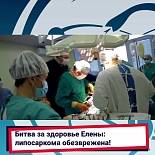 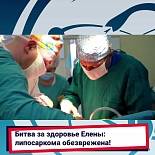 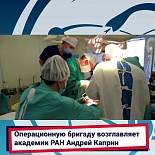 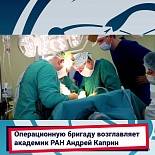 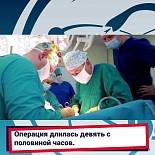 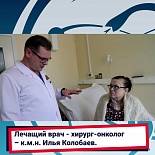 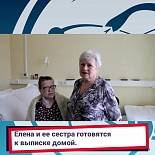 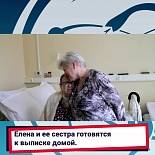