This method was invented in Germany, but only Russia was able not only to master it in full, but also to come up with its own "golden key" to it.

- The essence of the PIPAC method is to spray a solution of chemotherapy drugs through a special nozzle directly into the abdominal cavity during laparoscopy. This prevents the appearance of new metastases in the peritoneum, prevents the accumulation of fluid in the abdomen, and in some cases leads to the complete disappearance of existing metastases, - says the head of the thoraco-abdominal department of the P.A. Herzen Vladimir Khomyakov. - Well-known medicinal anticancer drugs are used, including those produced in Russia. All the complexity and high cost of the method was not in the medicine, but in the device with which it is sprayed. Our institute has developed its own analogue of the nozzle, which is now produced in Russia, and therefore this kind of help has become more accessible to our patients.

It must be said that the methods of pay-pack and high-pack (HIPEC - hyperthermic intra-abdominal chemotherapy), as a rule, are used in patients with advanced forms of cancer, often as the only option for saving human health. The same happened last Friday. A fairly young 55-year-old man was operated on for peritoneal carcinomatosis, which developed as a result of the progression of stage 3 gastric cancer after a previous operation to remove the stomach. He was injected laparoscopically with chemotherapy and took a biopsy of the peritoneum. This was already the second session of the pay-peck, and in comparison with the previous laparoscopy, almost all metastases completely disappeared. During the operation, the film crew for the first time, thanks to modern telemedicine, observed the very process of spraying a fine aerosol of a chemotherapy drug in the peritoneum. The head of the operating brigade V.M. Khomyakov showed a real metastasis when examining the forthcoming "battlefield". He looked like a white, harmless star, or a small jellyfish. Harmless because he was already defeated.

“Thanks to the structure of the nozzle, the drug under pressure turns into a fine suspension and, like a fog, penetrates into all parts of the abdominal cavity,” continues Dr. Khomyakov. “Thus, uniform treatment of all organs that could be threatened by new metastases is achieved.

The operation was successful, according to the surgeon, usually such patients are observed for another two days and can be discharged home.

Congratulations to the patient and the entire team of doctors and nurses of the third table on successful work!

Press service of the Federal State Budgetary Institution of National Medical Research Center of Radiology of the Ministry of Health of Russia. 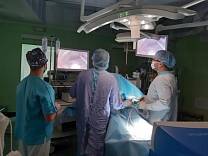