At P. Hertsen Moscow Oncology Research Institute, a branch of the NMRRC, a team of surgeons under the leadership of the Director General, Chief Oncologist of the Russian Ministry of Health, Academic Andrey Kaprin and Deputy Director General for Surgery Andrey Ryabov performed a complex surgery to remove a large retroperitoneal non-organ tumor.

Patient Dmitry B, from Moscow has so far undergone 5 operations to remove liposarcoma in the retroperitoneal space. The first operation was performed in 2011, the sixth one was performed by P.Hertsen MORI oncologists on February 10th, 2020.

The distinction of this malignant tumor is its cells’ ability to remain undetected as they are disguised as fat cells. Its occurrence rate increases with age, reaching the highest level by the age of 60. Most often, it is men who suffer from this disease.

Liposarcomas can affect any part of the body, and often this is the retroperitoneal space. The patient attended the Institute in an extremely serious condition. The tumor was so large that it squeezed the arteries and organs of the gastrointestinal tract, thus blocking the way for natural digestion. The disease was progressing steadily. The patient complained of general weakness, a rapid growth in volume of the abdomen, constant pain, and failure to eat independently.

The case conference made the decision to remove the non-organ retroperitoneal tumor as the only way to help the patient. The complexity of the operation was that repeated surgery always involves the removal of a common adhesive process, on top of his, the patient had nearby organs being squeezed by the tumor, thereby blocking their activity.

The surgery took 12 hours. The patient had all recurrent tumor nodes removed along with the right half of the colon, besides that a small bowel resection and left-side hemicolectomy were performed. All other abdominal organs were preserved. In total, the tumor weight was almost 12 kg.

Dmitry is still in ICU, but will be soon transferred to the ward. We would like to wish our patient a fast recovery and good health! 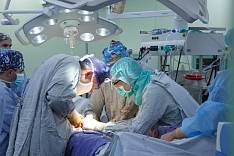 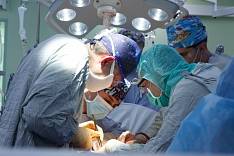 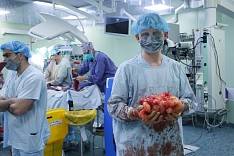 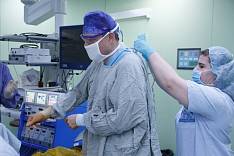 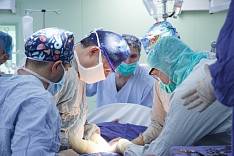 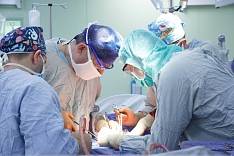 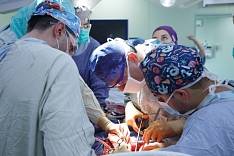 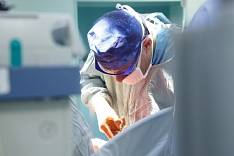