Chemoperfusion is a very complicated method of treatment for cancer. It requires sufficient technical support and surgeons skills. Therefore, it is rarely used in modern Oncology. Chemoperfusion is a variant of local chemotherapy, when the drugs are injected directly into the tumor localization zone. At the moment of treatment the whole affected area should be isolated from the rest of the body by making special barriers or by pinching blood vessels. However, the method of chemoperfusion of the liver affected by multiple metastases has already been described in foreign and domestic medical periodicals.

To destroy the metastases, doctors use a high-dose solution of a chemical medicine of the required temperature and wash the liver. This type of operation requires the coordination of highly qualified doctors of various specialties and the availability of appropriate equipment.

The oncologists team, led by the NMRRC Director General and RAS full member   Andrei Kaprin joined the colleagues in Kostroma Cancer Center and successfully performed surgical operation of these kind on the 14th of November. Now the 70-year-old patient Natalia, is in intensive care, she is breathing independently, her

- The operation was completed normally, and our patient's health status corresponds to the severity of the surgical intervention, - commented Vladimir Unguryan, chief physician of the Kostroma Oncology center.

- We hope to achieve the most successful result that this method can give. We used a chemotherapy medicine that was 10 times higher than the normal concentration in order to increase the impact power on the tumor. However due to the implemented Chemoperfusion method we saved the patient’s body in a whole from the heavy impact of the drug.

- Until now there were only two cancer centers in the US and Germany that had experience of using this method and implementing the specialized equipment.

- Kostroma Cancer Center is now being powerfully renovated and expanded, and performs already the second operation of this kind, and therefore Kostroma can become the third center in the world for this type of cancer care.

The above mentioned Natalia patient from Kostroma had an eye tumor - uveal melanoma - detected and successfully removed, 15 years ago. Uveal melanoma is extremely rare case, presenting 3% of the detected total melanoma. However, the liver often becomes the site of a tumor relapse. Another organs, such as stomach, intestines, and chest produce metastasis - and it is extremely difficult to treat. Our patient Natalia's tumor was rapidly spreading and growing, and it was useless to conduct standard chemotherapy treatment.

Therefore, the doctor's medical council chaired by Vladimir Unguryan, Chief physician of the Kostroma Oncology center chief and the Chief oncologist of the Kostroma region, offered the patient a rare method - chemoperfusion.

- I believe, everything will be all right, - said the patient to the doctors on their medical round on the eve of the operation.

- The main task for me is to be strong. I fill myself strong enough and ready for the operation.

The operation lasted 6 hours, and two teams of surgeons worked simultaneously. The work turned out to be well-coordinated and effective.The first stage of the operation, namely liver isolation, was performed by Dr. Leonid Petrov, head of the abdominal Department of the A. Tsyb Medical Radiological Research Centre –branch of the NMRRC. He said:

- Within half an hour we were ready to understand each other without words.

The chief oncologist of the Central Federal district, Dr. Sergey Ivanov, took part in the above-mentioned Kostroma operation. Dr. Ivanov proposes that in the near future, the capabilities of the method can be expanded by using radionuclides.

Doctors are confident that using this method will increase the overall survival rate in patients with inoperable primary or metastatic liver cancer.

- The use of this Method requires very high professional training of doctors of several specialties at once - abdominal surgeons, chemotherapists, perfusiologists, anesthesiologists to work as a well-coordinated team as well as appropriate equipment of the clinic, - said academician Kaprin.

- And, of course, the desire of doctors to look for something new that will help cope with kind of the disease, even yesterday hopeless patients. Kostroma has such a team.

The purpose of the trip to Kostroma for the Chief oncologist of the Russian Ministry of health Dr Kaprin was not only to exchange experience, but also to assess the real state of cancer care in the region.

During the visit, the guests from Moscow and Obninsk examined the new under construction building of the hospital, studied the plan for the development of diagnostic and radiological services in the region, the creation of an outpatient cancer care Center, and the modernization of the cancer care system as a whole.

- It should be noted that this work is being carried out with the active support of the regional administration, - said Andrey Kaprin at a meeting with the Region Governor Sergey Sitnikov.

- New equipment is being purchased and young personnel are being attracted. At the same time, there is no Medical University in Kostroma. This, of course, is the number one task for the development of cancer care.

- The most important thing is that the cancer clinic has a new active team of young people who have a very good education, passed a good practice, and came to Kostroma land. And today we have gathered a really powerful team that strives to fight for every patient, - said the Kostroma region Governor Sergey Sitnikov at a meeting with Andrey Kaprin. 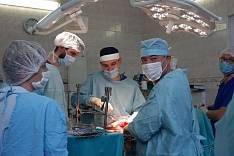 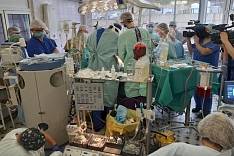 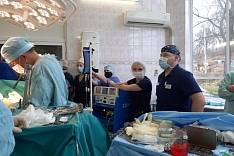