Last year a 39-year-old woman from Volgograd was diagnosed with uveal melanoma, which soon had metastasized to her liver. This type of disease is extremely aggressive and does not respond well to standard anti-tumor treatment.

- By August 2021 the patient had exhausted all possibilities of conventional treatment," Vladimir Unguryan, head doctor at the Kostroma Cancer Centre, told us. - She was treated at her place of residence, then she was referred to our oncologic dispensary, knowing that we have mastered a new method of treatment of such patients - isolated chemoperfusion of liver cancer. We operated on her with good results.

However, despite the positive results, the method of isolated perfusion of the "open type", when the liver is temporarily "removed" from the natural blood supply and connected to an artificial circulation machine and carried out under general anaesthesia, is associated with high risks.

Therefore, the question arose about improving the method of delivering the chemotherapy, and the next stage of chemotherapy was decided not to be done in the "open" way, but using the method of endovascular access to the tumor. That is, through a large blood vessel that approaches the liver.

This method of "delivery" of chemo- and radiopharmaceuticals has been successfully mastered and is widely used at the Tsyb MRRC, a branch of NMRRC, which performs the largest number of radioembolizations in the country. In addition, Kostroma oncologists have already had experience of joint operations with their colleagues from NMRRC under the guidance of the General Director, RAS Academician Andrei Kaprin.

- Our joint experience in performing liver and brain chemoperfusion with specialists from the Kostroma Oncological Centre allowed us to take the next step in this direction," Prof. Andrey Kaprin says., "so the second stage of treatment of the Volgograd patient was decided to take place in A.Tsyb MRRC.

- Unlike "open" chemoperfusion, in our case the solution is delivered to the tumor through small punctures in the skin, through which special catheters are inserted into the main vessels under X-ray control," explains Valery Kucherov, head of the Department of Radiosurgery, "This manipulation, which combined two advanced techniques, was carried out by Russian oncologists as one of the first in the world.

We would like to remind the reader that liver chemoperfusion as a method of treating multiple metastases has been described in the international and national literature, but it is rarely used in modern oncology due to extremely complex technique and until recently it could be performed only once in unresectable patients. The essence of the method consists in vascular isolation of the liver and its "flushing" with a high-dose chemotherapy solution of the required temperature using an artificial circulatory machine. This maximises the concentration of the cytotoxic drug in the tumor cells without causing harm to the body.

Since 2020 the method of isolated liver chemoperfusion has been successfully applied in a scientific protocol at the Kostroma Oncologic Dispensary. When in the process the question of minimizing surgical trauma and the possibility of multiple repetitions of the procedure became clear, the choice of the scientific and clinical base for the use of endovascular technique was clear. And so, the first isolated liver chemoperfusion operation with the use of endovascular technique was performed on November 6, 2021 in A.Tsyb MRRC (Obninsk).

Despite the duration and complexity of the intervention, the patient survived the operation and was discharged from the hospital 3 days later in a satisfactory condition. Further clinical application of this technology will be continued in the framework of a scientific research protocol. 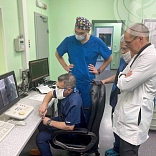 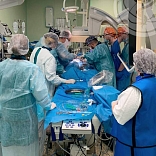 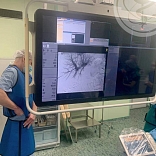 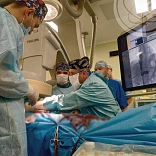 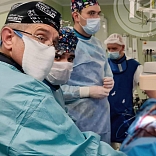